THINC strongly supports the zero density option (Option 1) on Treasure Hill and believes the best place for any development is at the base of PCMR.  The Treasure Hill land needs to be protected and preserved as the current Park City landmark that it is.

The only way to be sure that the citizens protect Treasure Hill forever and get the best return on any investment in open space $ is to support Option 1 and remove 100% of the density.

The City and Sweeneys have been discussing 3 specific options.  These options were presented at the recent Treasure Hill open house:

Remove all density (413,000 square feet) from Treasure Hill and preserving the land as open space.

To recap, Treasure Hill has vesting from 1985:

The 1985 MPD and also attorney Jody Burnett’s independent legal opinion allows for up to an additional 5% for support commercial and meeting rooms.  There is no back of house approval amount and based on our information, recent projects have an additional 30-50% back of house space.  The Sweeneys continue to seek much more.

The new design shown at the open house (Option 2) gives no specific total sq ft at all.  Craig Elliott did however create a video that explains why the new design is much less efficient than the previous 2005 design.  This translates into a much larger total sq ft than ½ of the 2005 application.  Although no one was willing to speak about the numbers, our best guess is that the total square footage currently being considered is approximately 550,000 to well over 600,000+ sq ft.  This is somewhere between 250-300% of the advertised 213,000 net sq ft.

The design is qualitatively better than before, but still includes 10 stories above ground for the majority of the buildings (internally facing 10 stories + underground parking levels).  It is our belief that there should never be any work done or agreements made (other than TDRs) using only net sq ft.  This only hides the facts from the citizens.

The net is that the citizens may be asked to pay the Sweeneys $15 Million and still get a project larger than their original MPD approval in 1985.

2         A new TDR receiving zone is created on the PCMR ski property near the bottom of Payday and Kings Crown runs.

4         Sweeneys, PCMR, and Bernolfo all pool their land and approvals together to create and sell a huge new project above PCMR base area and Marriott Mountainside to another hotel developer.

If this scenario plays out, the Sweeneys get paid by multiple parties including the Park City citizens, a developer at the PCMR base, and by a developer for Treasure Hill.  Treasure Hill gets built to approximately 3 times the 213,000 sq ft and is still larger than the original 1985 approval.

While the new design is better – the mid station parcel is removed and the new design goes beyond their boundaries up the hill.  Still, no neighborhood impacts are mitigated – especially for Lowell and Empire Avenues where all the traffic will still need to be somehow accommodated.  There is a huge 10 story hotel built (plus undisclosed additional underground parking floors 3+) in a residential area where the LMC requires the MPD be “compatible in terms of building types and character with the surrounding area and would not alter the essential character of the district”.

It seems that the tax payers get little (if anything at all) for $15M.  The only good we see is that the mid station parcel goes away (which is excellent), but something much bigger will reappear at the resort. Treasure gets built larger than originally approved and Old Town is forever drastically altered and the citizens are complicit by paying $15M for this (in a smaller bond).

Our opinion based on all this is that the “½ density option” (Option 2) should only be a second choice and only looked at after the 100% option (Option 1) is put on the ballot and only if it fails.  The price tag may be higher, but the return is clear and significant with permanent, vital open space protected forever on the hillside adjacent to Old Town.  Please see the illustration below for estimated costs.

Regarding the mine tour, it might seem like a good idea however, anything that encourages additional traffic to the proposed development is very problematic.  The traffic issues remain unresolved and approval by City Planning and City Council for any proposed development will still be necessary.

The only way to be sure that the citizens protect Treasure Hill forever and get the best return on any investment in open space $ is to support Option 1 and remove 100% of the density.

If you were unable to attend the open house please see the links below for more details and slides on the information that was presented:

Estimated Cost of Bonds to Voters in Park City: 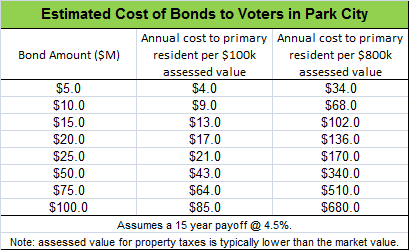 Filed under From THINC