I wanted to make sure everyone was aware there is a key City Council meeting this week on Thursday night. There are two topics pertaining to Treasure Hill on the agenda.

Second, the City Council is considering retaining outside special counsel to fully review the 1986 Master Planned Development and vesting rights related to the proposed Treasure Hill development. I would strongly encourage you to voice your support for retaining outside counsel.

Below are the meeting details:

If you cannot make the meeting please write directly to the city council members and voice your opinions. Their email addresses are below:

You can also include Katie Cattan from the planning department at kcattan@parkcity.org.

Below is a link to the agenda and staff report for the meeting:

Unfortunately I am out of town so I will not be able to make the meeting.

I also wanted to forward a couple of interesting articles which appeared in the Saturday edition of the Park Record:

There is also an article in the paper today which focuses on Treasure Hill supporters:

It seems the Park Record is not being objective in their coverage of Treasure Hill. The paper seems to be making a significant effort to show support for the development and the Sweeneys rather than focus on the real issues that this development would have on Park City. Keep in mind how reluctant the paper was in posting a large rendering of this project until we took out a full page ad to show the truth. You can always voice your opinion to the paper at:

Letter of Concern to the City Council

I am writing you to express the concerns of over 400 residents of Park City who are part of THINC. The group includes residents, business owners and home owners from all over Park City including Park Meadows, Pinebrook, Thaynes Canyon, Deer Valley, Promontory, Glenwild, Old Town and elsewhere.

THINC’s collective mission is to raise public awareness and to help initiate action in order to preserve and protect Park City’s Historic Old Town. Our first and main project has been to raise awareness and voice concerns about the compatibility of the development of Treasure Hill.

Second, City Council is considering retaining outside special counsel to fully review the 1986 Master Planned Development and vesting rights related to the proposed Treasure Hill development. THINC strongly encourages the City Council to support retaining outside counsel to review this proposal, the MPD that was granted over 20 years ago, vesting rights, and the rights of all citizens of Park City. It is important for the City to take all reasonable steps in its consideration of this massive project on behalf of all of the citizens of Park City. The public, prior City Council members and now Planning Commissioners have all raised questions regarding the legality of the MPD given the lapse in time and the various questionable administrative procedures which took place. With all due respect to the City Attorney, land use is a complicated area of the law and it is absolutely appropriate for the City to have a lawyer with the requisite expertise to assess the current merits of the MPD approval. Indeed, if City Council declines to approve the hiring of outside counsel to do a thorough review of this matter (particularly if Council declines due to budget concerns while in the midst of potentially approving million $ renovations to the Racquet Club and 125th Parties throughout the year), the City Council will raise some serious public confusion or potential resentment.

We trust the Council recognizes its critical role in ensuring the responsible growth and compatible development of projects within this City – new projects should not severely compromise the quality of life of our citizens.

On behalf of our 400+ members, we thank you for your consideration.

With the Planning Commission meeting just days away we are compiling photos pertaining to safety and traffic issues, espically on Empire and Lowell Avenues.  This new storm system should help us document some of the traffic problems we see with new snow on the streets.  We will be collecting photos to be given to the Planning Commission before the meeting on Wednesday.  You can send them to thincpc@gmail.com.

Here are some great photos taken on Empire Avenue. 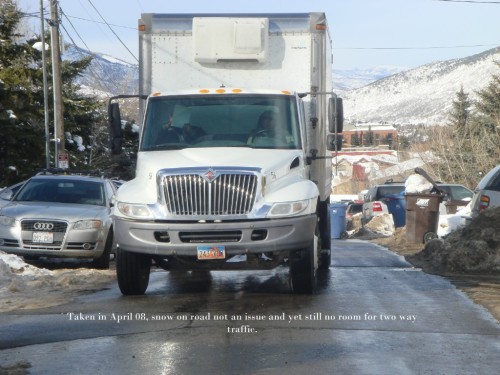 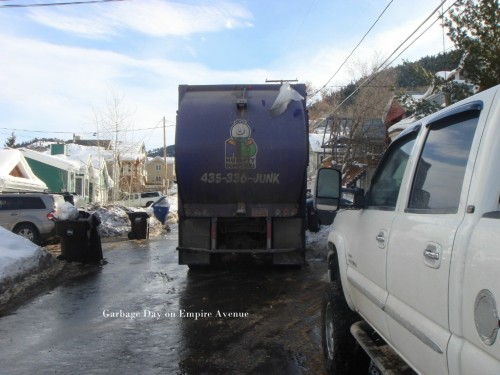 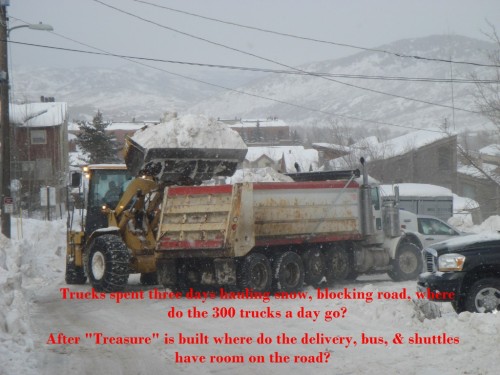 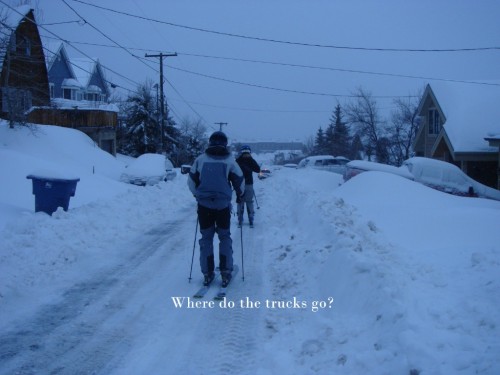 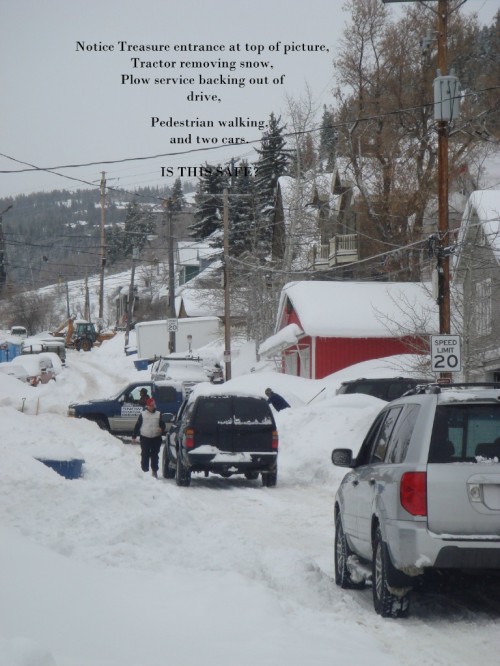 February 7 Editorial in the Park Record
Treasure: Just because you can doesn’t mean you should

The Park Record in recent months has received a barrage of telephone calls and emails imploring the newspaper to make citizens aware of the enormity of the proposed Treasure development planned for the hillside west of Old Town. The Park City Planning Commission is scheduled to hold a work session at 5 p.m. and a public hearing at 7 p.m. about the project this Wednesday, Feb. 11, at The Yarrow hotel at 7 p.m.

The rendering itself, on the front page of this edition, should serve as an urgent call to action.

Based on current economic and environmental concerns, and the city’s growing battle with traffic congestion, we believe most residents would oppose putting 200 hotel rooms and 100 condominiums, along with commercial and meeting space, on the slopes above the steep, narrow streets of Old Town.

Property owners, especially those who own or manage local businesses, are keenly aware of the impact all of the new hotels, condos and commercial establishments already have had on the limited labor pool. While it is unlikely the developers of Treasure will build all of the project at once, each increment will put more stress on the city’s already inadequate employee-housing inventory.

Another immediate concern about the project is its inevitable traffic impact. Old Town and Deer Valley already comprise a sizeable bubble at the end of a narrow bottleneck. Adding another bulge to an already strangled commercial intersection could constitute a fatal blow to Main Street’s ambiance.

But the most glaring criticism of the project is its resemblance to the financial excesses that are now taking their toll on the national economy. The scope of Treasure may be financially feasible in some future superheated economy, but is far beyond what is appropriate for the community.

But, the difficult decision facing the Planning Commission is not whether Park City can sustain another vast project, it is how to mitigate a behemoth approval that is now more than 20 years old.

While the city and planning commission may be legally obligated to honor the previous approval density, the Sweeneys do not have to demand it. For the same reason that Wall Street executives are now being vilified for taking advantage of a self-destructive system, the Sweeney legacy could be the monstrosity they insist on building. Or they could voluntarily release the city and its residents from what should be an obsolete approval.

On one hand, the Sweeneys have a lot to gain financially by holding Park City to its legally binding agreement. They could sell off each parcel with its bloated density to the highest bidder and then hightail it out of town. On the other hand, we can only hope that they would find greater value in protecting the intrinsic worth of the land by proposing a significantly smaller development.

Filed under THINC in the News

We would like to start off by thanking everyone who has visited this site and showed their support in the last couple of days.  We have had over 600 visitors in the last 48 hours!  Our member list is growing and we are getting some great comments and letters of support on the VOICE page.  We are making changes to the site every day so keep checking back for updated information and site improvements.  We are looking into an online petition and some other features that will help our letter writing campaign so check back for those updates.

There has been a venue change to the upcoming Planning Commission meeting in anticipation of a big public turn out:

The meeting will be held at the Yarrow Hotel in the Ivers Room on the second floor.  The Yarrow Hotel is located at 1800 Park Avenue.  The Planning Commission Work Session will begin at 5 pm on Wednesday, February 11, 2009.

We have only received photos from a couple people so far.  Past and current photos will really help tell the story on Old Town streets.  Katie Cattan from the PC planning department has requested that we collect any and all photos to be submitted for the 2/11 meeting on traffic and safety.  She will put them on a disk and will make them available on a projector for presentation and discussion.  Send photos to thincpc@gmail.com.

We have begun meeting with potential legal council to assist in the efforts to help mitigate the impact of Treasure Hill.  There would be a cost associated with this and would require fundraising.  Let us know if there is interest in doing this?  You can comment on the VOICE page or write us directly.

We have had some people ask about t-shirts and stickers.  We love the idea and would like to see what you think.  Would you purchase a THINC t-shirt or bumper sticker?

We hope to see everyone at the meeting on Wednesday,

I would encourage all of us to start to remember and compile them for this meeting.  I would also like to suggest we get out and take photos or find past photos of any of the above examples.

You can send photos to us at thincpc@gmail.com and we will compile them for the meeting. Or bring them to the meeting on 2/11 to help substantiate your concerns.  I will also see if we can have access to a projector screen.

These are instructions from the city on photos for the meeting: